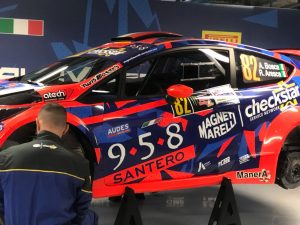 The Monza racetrack has become the stage for a rally, with 128 cars entered in the race and the respective crews that have lined up on the sides of the square, available to photos and curious glances of the fans.
From 14.15 the best teams will compete in a show of curvettes and hairpins of 1.5 kilometers prepared on the central straight of the Autodrome.

The Monza Rally Show should be a way to close 2017 while having fun. But no, for Valentino Rossi and Antonio Cairoli it is becoming an increasingly competitive challenge. Last year Rossi has won five times, while Tony Cairoli has never reached the top step of the podium. But this time, with the Hynydai i20 WRC the nine-time world champion can really make his mark.

Unfailing is the presence of Fabio Barchitta, ex-pilot of the premier class, the 500, CEO & Founder of Fastback Sport Marketing who will be a guest in the hospitality of Tony Cairoli, thanks to AUDES official sponsor of the team.
We can only wish a hearty good luck to the most successful motocross riders in history. 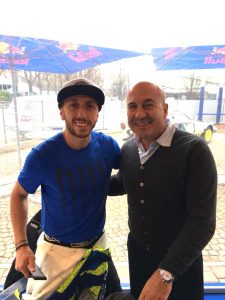 Team Esterella Galicia 0.0 MarcVDS and Europe Energy In the MotoGP 2018

You can find out more about which cookies we are using or switch them off in settings.

This website uses cookies so that we can provide you with the best user experience possible. Cookie information is stored in your browser and performs functions such as recognising you when you return to our website and helping our team to understand which sections of the website you find most interesting and useful.

Strictly Necessary Cookie should be enabled at all times so that we can save your preferences for cookie settings.

_gali: permanent cookie with 2 year Grab a cuppa with your developer and run through the detailed log. ;)

If you disable this cookie, we will not be able to save your preferences. This means that every time you visit this website you will need to enable or disable cookies again.

This website uses Google Analytics to collect anonymous information such as the number of visitors to the site, and the most popular pages.

Please enable Strictly Necessary Cookies first so that we can save your preferences!