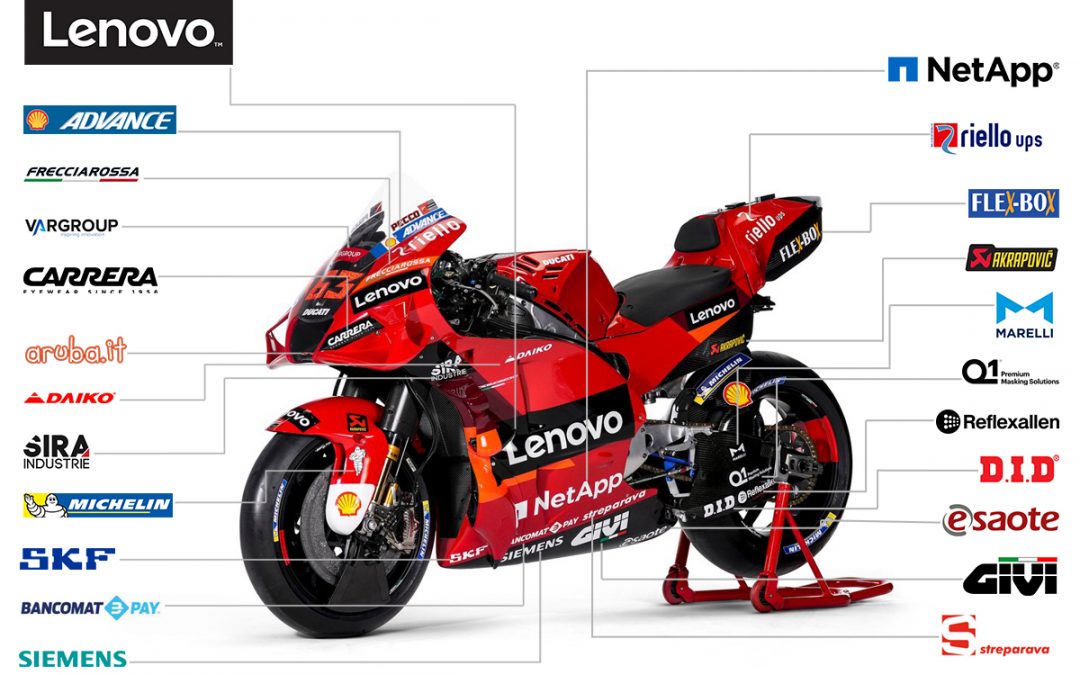 Let's find out in detail which sponsors support the official Ducati MotoGP 2022 Team. They include technical supplies, sharing of services, commercial partnerships and much more.

Let's start with the title sponsor, as we can already see from the name Ducati Lenovo Team MotoGP. Lenovo, formally Lenovo Group Limited, is a Chinese multinational computer company, founded in 1984 and capable of developing and producing both hardware and software. Today it boasts a turnover of over 60 billion dollars and over 70 thousand employees, mainly in China, although its market is global. The collaboration with the manufacturer from Borgo Panigale includes the development of the "Remote Garage" IT infrastructure, which allows faster and more functional interaction between the team and the factory. Lenovo also supplies the various devices used by the team members.

Next up is NetApp, which stands for Network Appliance, Inc. This Californian company was founded in 1992 and is active in the field of data management and cloud systems and boasts a turnover of almost 6 billion dollars. For Ducati, NetApp has provided its advanced systems to improve the efficiency of design and the transfer and sharing of all data.

The Daiko brand appears on the sides, in a smaller size than the previous names. The Treviso-based company specialises in the production of welding equipment, especially for the advanced solutions used in racing.

Riello Elettronica, founded in 1986 in Legnago, is an international holding company operating in the energy, automation and security sectors. The partnership with Ducati celebrated 15 years in 2021 and continues into the current season. Specifically, the presence on Ducati motorbikes is linked to the Riello UPS division, which produces uninterruptible power supplies, energy storage systems and photovoltaic conversion.

The Flex-Box logo appears on either side of the large tail, identifying the world's leading container factory in Hong Kong. This is a long-standing collaboration that began in 2016.

At the bottom end is Streparava, a company from Brescia that has been producing mechanical components for the automotive, motorbike and transport industries for over 60 years. Chassis parts, arms, supports, suspensions, shafts and much more make up the offer of the Adro-based company. The relationship with the Italian team began in 2018 and involves the supply and manufacture of advanced components for the Desmosedici GP.

Sira Industrie is a group from the province of Bologna operating in 3 different production areas. Machinery for aluminium die-casting, mainly for the automotive sector, radiators for heating and design/realisation of production units and plants. It is a reality that just this year entered the list of sponsors.

The Bancomat Pay logo identifies the popular online payment system: it will be present on the Desmosedici GP and on the riders' suits from 2019.

On the fairing, on either side of the air intake, appear the logos of Carrera, the famous eyewear brand founded in 1956. The Padua-based company, owned by Safilo, has always had a strong relationship with sport, particularly motorsport. It is no coincidence that the name comes from the passion of its founder, Wilhelm Anger, for the gruelling Carrera Panamericana. The sponsorship signed this year is valid for 4 years: the collaboration has resulted in a collection inspired by the lines and materials of Ducati models.

Since 2018, Team Ducati has signed an agreement with Frecciarossa, Trenitalia's high-speed service. The basis of the co-branding is obviously the sharing of Italian excellence with speed in its DNA.

At the base of the fairing's plexiglass is the Vargroup trademark, which identifies an Italian consulting company active in the field of business digitalisation. Ducati has been working with this partner for several years in the field of HPC (High Performance Computing), which assists designers in their activities.

SKF, which stands for Svenska KullagerFabriken, is a Swedish company that has been active in the production of bearings, lubricant systems and precision engineering since 1907. It has 110 production plants with a total of over 40,000 employees. It has been providing the Ducati Team with technical and human support for over 10 years. Specifically, radial and angular contact ball bearings, cylindrical roller bearings, spherical roller and needle roller bearings, wheel hub units and inner rings.

The bottom end of the hull bears the Esaote logo. This Genoese company was founded in 1982 as a branch of Ansaldo, specifically becoming the Ansaldo Elettronica Biomedicale Division. Today it designs and manufactures systems and equipment for advanced medical diagnostics. The presence within the category allows Esaote to reach a wide audience and a large number of countries to show its know-how. The partnership runs from 2020.

Givi is a brand from Brescia in the motorbike sector for which it has been producing accessories such as bags, top cases and similar items since 1978. It has long been associated with motorsport being present on the Desmosedici GP since 2016 and also in Lucio Cecchinello's LCR Team for over 20 years.

Q1 Premium Masking Solutions deals with masking tapes and paint supports. It is part of the PPM group, has more than 25 years of history in the industry and is based in Brembate di Sopra, near Bergamo.

The swingarm bears the logo of Reflexallen, a Modenese company based in the motor valley and active in the automotive sector. The company, which employs well over 1,000 people, supplies precision components, design, prototyping and testing.

Marelli identifies the new group incorporating Magneti Marelli and Calsonic Kansei. The merger has created one of the most important giants in the automotive industry, with 170 production sites around the world and a turnover in excess of 10 billion euros.

Aruba.it is a historic Italian company in the digital field. Founded in 1994 in Florence, it offers hosting, data centre, data management, domains and e-mail services. It currently employs around 900 people and has a turnover of almost 200 million. Its relationship with the Borgo Panigale manufacturer has been consolidated through the sponsorship of the Superbike team.

The underside of the fairing is home to Siemens, a German-based multinational with a turnover of almost 90 billion euros and almost 400,000 employees. The collaboration between the companies goes back more than a decade, when Ducati began using the software and technical solutions offered by Siemens for design and production.

Akrapovic is one of Ducati's suppliers, specifically of exhaust systems. In addition to racing components, the Slovenian company also makes special parts for production bikes, and specifically a range dedicated to Italian motorbikes. Since 2014, the all-round partnership has replaced the historic one with the Italian company Termignoni. The entry of Ducati into the Volkswagen group, of which Akrapovic was already a supplier, was a decisive factor.

The supply of lubricants and fuels is provided by Shell. The British multinational is present with both its iconic logo and the Advance brand, which identifies its range of lubricants for high-performance motorbikes. The relationship with Ducati dates back to the 1999 World SBK Championship and from 2003 this link was extended to MotoGP. Since then the British company has been the original equipment for all of Borgo Panigale's bikes.

Michelin is the sole tyre supplier for the entire category and its presence is therefore mandatory on all models competing in the race.

Let's add Amaro Montenegro to this list: the historic product from the province of Bologna has been a Ducati sponsor since this year thanks to the mediation of Fastback! The two-year agreement provides for the presence of Amaro Montenegro in the team's hospitality at all stages of the world championship. A stage that certainly contributes to making it known all over the world. If you too would like to understand how to place your brand on the bikes of the world's most important categories, visit the dedicated section of our website!