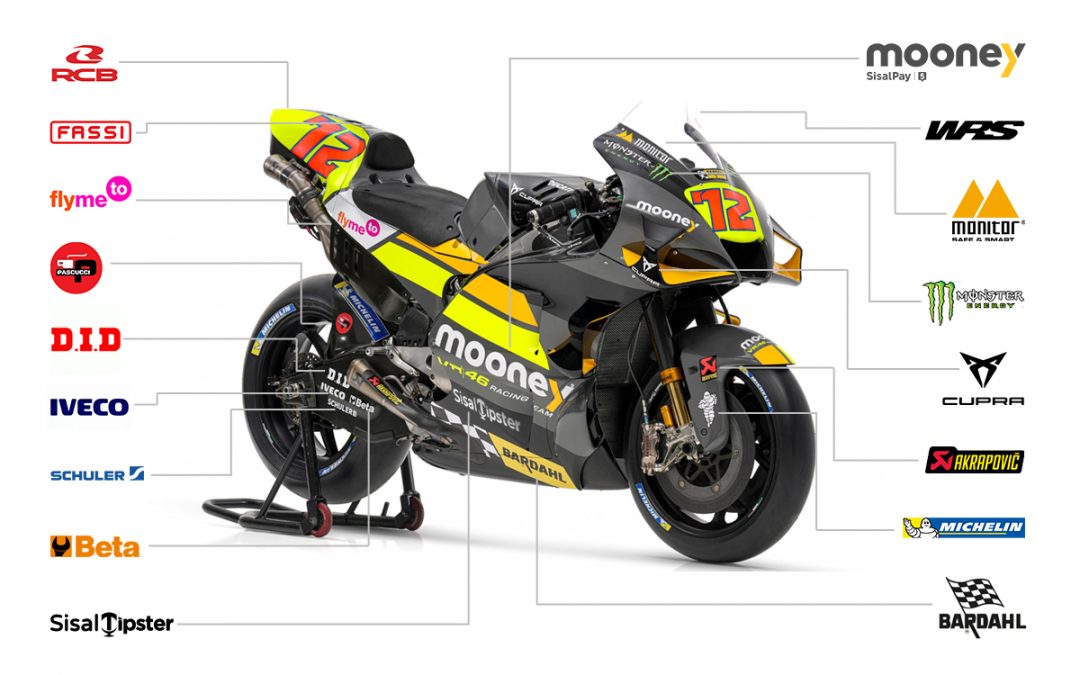 Team VR46 is one of the up-and-comers on the motorcycling scene. Being headed by a charismatic and popular figure like Valentino Rossi has contributed in no small part to its rise and to making it easier to find investors.

The two Ducati Desmosedici GPs fielded in the top class feature a distinctive gray livery with yellow and lime accents. This is due to the colors of main sponsor Mooney. Established in December 2019 from the union of SisalPay and Banca 5 - Intesa Sanpaolo Group, Mooney has one goal: to make payment services and transactions, until now available only at bank branches, always at your fingertips thanks to a network of more than 45,000 points of sale - bars, tobacconists and newsstands - perfectly integrated with the most modern digital platforms. From the collaboration with the team came the VR46 Card, a product distinguished by personalized graphics that allows access to exclusive promotions as well as a free branded gadget.

SisalTipster is the social community dedicated to sports event analysis. Each week it offers dozens of content to evaluate all the elements that can influence the trends of the most anticipated matches. Communication is entrusted to a team of 5 experts who interpret 5 different perspectives of analysis: the Game Analyst, the Historian, the Professor, the Ponderer and the Tactician. The brand made its appearance on the team's bikes (including Moto2 bikes) after the summer break, following the successful conclusion of the agreement between the parties.

Båstad-Gruppen is a modern company with a long footwear tradition. Today it is one of the leading suppliers of safety and professional footwear in the Nordic region, which it distributes throughout Europe. It also owns the Birkenstock Scandinavia brand, by the way. In the mid-2000s, Båstad-Gruppen founded a proprietary brand, Monitor: the current product range exceeds one hundred items including safety footwear, professional footwear, and workwear.

Monster Energy is currently one of the most easily identifiable brands in racing. Monster Beverage Corporation, the group that owns the brand, bases its communication strategy with large investments in sports and supporting top athletes such as the other famous energy drink - Red Bull. Monster is the main sponsor of Yamaha in MotoGP but also sponsors Ducati Lenovo and of course Team VR46. We also find it on the fairings of Team Kawasaki in Superbike, alongside Lewis Hamilton in F1 (as with Valentino Rossi, there is a dedicated can for the British champion) and in numerous other disciplines, from supercross to Nascar.

Bardahl is a U.S. company operating in the engine chemical additives and lubricants industry, founded by Ole Bardahl in 1939 in Seattle. Bardahl is present in the MotoGP alongside VR46, through its partnership with the Mooney VR46 Racing Team: the collaboration follows its sponsorship to the Riders Academy and its team in the CIV in past years.

Flymeto is a global travel agency that deals with booking hotels, airline tickets, and general vacation packages. Flymeto was established in 2018 in the Czech Republic as a brand of Web Shop Fly and in motorsport provides travel arrangements for all staff. It is a partner of VR46 in MotoGP and Team MIE Racing in Superbike. We conducted an interview with the head of the racing project, Mario Cantoni Fiala, which you can find here.

Seat Cupra Sociedad Anónima Unipersonal, known commercially as just Cupra, is a Spanish automobile company founded in 2018. It identifies itself as the sports and performance car manufacturing subsidiary of parent company SEAT. The name comes from the fusion of the terms "Cup" and "Racer" to emphasize precisely the brand's racing vocation.

Akrapovic is one of Ducati's suppliers, specifically exhaust systems. In addition to racing components, the Slovenian company in fact makes special parts for production bikes and specifically a range dedicated to Italian motorcycles. The all-round partnership has replaced the historic one with Italy's Termignoni since 2014. Decisive was the entry of Ducati within the Volkswagen group of which Akrapovic was already a supplier.

D.I.D is the world's largest supplier of motorcycle chains. Established in Japan in 1933, it is part of the DAIDO KOGYO CO. group, LTD. Of which it represents the division dedicated expressly to two-wheelers. It is a partner of numerous teams in both MotoGP and Superbike (in addition to its involvement in off-road).

Caffè Pascucci is a brand with more than 600 coffee shops around the world, of which only 40 are in Italy (10 directly operated), 50 in the United States of America, and mostly in Asia. Only products derived from certified organic blends are served in Pascucci shops. The company has already been involved in MotoGP having previously been a sponsor of Team Gresini.

Göppingen-based Schuler Aktiengesellschaft is a German forming company and the world's largest press manufacturer. In motorsports it operates in cooperation with Porsche, with which it has set up a specific production plant for body parts.

RCB, an acronym for Racing Boy (and formerly Meng Kah Auto Parts Trading Sdn Bhd) is a Malaysian company engaged in the production and distribution of high-performance after-market components. It is an official partner of VR 46 and several other world championship teams.

Beta Utensili supports VR46 by supplying its technical equipment to the team's mechanics. The Sovico-based company now employs more than 900 people and its offerings span more than 3,000 products. Its involvement in sports competitions ranges from 2 to 4 wheels, from Formula 1 to MotoGP and Superbike.

Iveco has signed an agreement with the VR46 team through which its S-Ways will transport equipment throughout Europe. The all-Italian truck brand, has made as many as three customized vehicles available to the Mooney VR46 Racing Team for four years.

Michelin is the sole tire supplier for the entire category and its presence is therefore mandatory on all models engaged in the race.

Check out the liveries of other Ducati teams inside our blog and stay updated for upcoming 2023 color schemes.